There are many telephone museums in USA and several in Georgia. But the modestly named Georgia Rural Telephone Museum claims to have the world’s largest collection of telephones.

Located in Leslie, Georgia in a 1920s cotton warehouse, the museum boasts over 2,000 phones, dating back to an Alexander Graham Bell replica of the “Gallows” phone he invented in 1875. The phone could only transmit voice-like sounds but Bell developed his invention and went on to make the very first telephone call, in March 1876, with the words, “Mr Watson, come here! I want to see you,” heard very clearly by his assistant.

The sprawling museum contains room after room of telephones, from the early days of telephony, including many wooden wall-mounted phones through to rotary dials and novelty phones. There’s also early day telephone booths and switchboards, including two used in Jimmy Carter’s 1970s presidential campaign. Carter, whose campaign headquarters was in his home town of Plains, just over 20 miles west of Leslie, was a guest of honor at the museum’s opening.

A quirky sense of humor is at play in the museum, where mannequins dressed as telephone operators are dotted around. Even a stuffed grizzly, ‘Bubba the Bear’ wears a headset (dial ‘1’ on the private line to hear him roar). Memorabilia here extends to an impressive collection of vintage vehicles dating back to the early 1900s, including a local fire truck and an early rubber-tired John Deere tractor, one of the first of its kind in Georgia. There’s also a Creek Indian Village featuring early communication with smoke signals and a collection of nautical items – boating was another passion of the man who owns these artifacts, Tommy Smith.

It all started with telephones, though, explains Clint Ledger, one of Smith’s grandsons who work for him at the Citizens Telephone Company across the street. Smith began his collection shortly after returning home from World War II. His father-in-law, a cattle farmer outside of Leslie, suggested he try telecommunication as a viable postwar career so he bought the local telephone exchange and three more later on, including the Plains exchange. 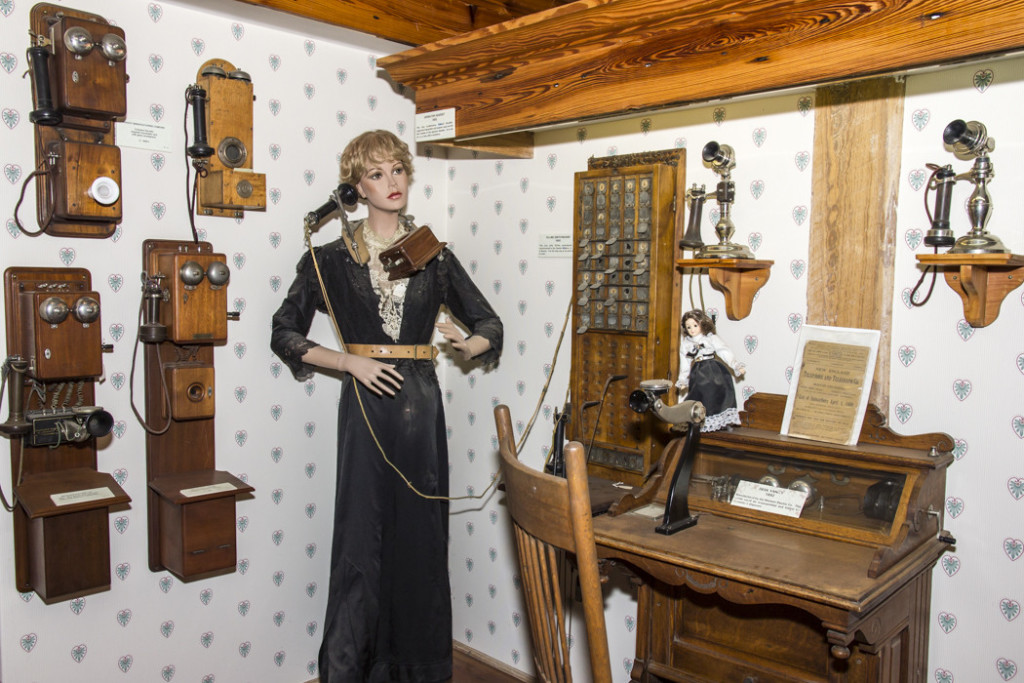 “We ran out of office space across the street at the telephone company, we needed storage and my grandfather wanted to put some of his personal collection on display – it just got outta hand!” laughs Ledger. “So he bought the cotton warehouse and we worked on the facility for five years before we opened to the public. We bought this building in 1989 or 1990 and opened in the of summer 1995.”

With seemingly countless phones and other collectables here, it seems like Smith is something of a hoarder. What does his wife think? “She knew what she was getting into!” says Ledger. “She’s an antique jewelry dealer herself. She owns a business called Small Treasures. And he’s been the same all of his life, never gotten rid of the interest.”

The telephone company is one of only 30 independents left in Georgia and Ledger says his grandfather, now aged 93, worked there until a couple of years ago, mostly six days a week. “He would go get the mail for the telephone company on Saturday when everybody else was at home. He’d sort the mail.”

He bought telephones from all over the world and many have been donated from other private collectors who wanted to be bequeath them to a good home. In one glass case is Smith’s favorite telephone, an 1896 Wilhelm Candlestick, with an elegant fluted shaft. “It’s made out of total nickel and it’s one-of-a-kind. He was real pleased to get that one,” says Ledger, adding that it’s the most valuable phone here. “One gentlemen offered $25 or $30,000 for that telephone.”

As you’d expect, Ledger grew up with the sounds of telephones ringing. His earliest telephone memory is having his own kid’s Mickey Mouse phone, just like the one on display at the museum. He started working for his grandpa early on. “I started here when I was 13, mowing grass. I’ve worked in almost every facet of the business,” he says.

Smith has seen all kinds of changes in the industry over the years – even the ubiquity of cell phones didn’t come as a surprise. “He owns several!” continues Ledger. “He knew the industry would evolve because he’s seen it evolve. Since the 40s we’ve gone through several different switches, whether it’s from a manual switch or electronic switch or digital switch.”

The museum contents, though, stop at vintage. There are no modern day phones. And, if you’re wondering, Grandpa is not on social media, reveals Ledger. “We are also an internet provider but he’s never used a computer!”

The Georgia Rural Telephone Museum has a Facebook page (not run by Grandpa) and is located at 135 N Bailey Ave, Leslie, GA 31764, Tel 229 874 4786. Open Monday to Friday 9am to 4:30pm. It’s right next to a stop on the tourist vintage train line, the SAM Shortline (Savannah Americus Montgomery line).

Article with thanks and as published on the web at:
Way into Atlanta
the best of Atlanta, Georgia and the South – August 7, 2014
Visit their full article here